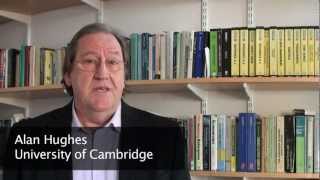 10 mrt How universities prefer to have small economic impact

Prof. Dr. Alan Hughes of the University of Cambridge addresses the Open Innovation Challenge for universities. He feels European innovation policy is being inspired by a cult-like belief in the would-be performance of both regional start-up companies and patents. Clearly, a cult focus is very different from a sound innovation policy.

In his opinion, to attain a large impact the better focus are large, possibly multinational players. Simply put, large players have a large impact, whereas small companies have a small impact. Professor Hughes argues that universities can play a role in innovation by supplying knowledge to these large players. However, transfer channels other than patents and start-ups are key to linking universities to these large players. He recommends to shift the current focus of transfer activity from ‘gazelles’ as successful start-up companies towards a holistic approach on knowledge transfer channels.